Spontaneous keloids are benign fibroproliferative tumors that extend beyond the original wound and result absent a significant history of trauma. Spontaneous keloids have been reported mainly in association with certain syndromes.

Noonan syndrome is a congenital, autosomal dominant disorder with a wide spectrum of phenotypic expression.2 Affected persons have a normal karyotype, and the syndrome occurs with equal frequency in both genders

Spontaneous keloids are benign fibroproliferative tumors that extend beyond the original wound and result absent a significant history of trauma. Spontaneous keloids have been reported mainly in association with certain syndromes such as Rubinstein-Taybi syndrome, Dubowitz syndrome, Noonan syndrome, Goeminne syndrome, Bethlem myopathy, and X-linked recessive polyfibromatosis.1 Noonan syndrome is a congenital, autosomal dominant disorder with a wide spectrum of phenotype expression.

A 26-year-old female presented to the dermatology department with skin lesions on her body that had been present for 22 years. These lesions first appeared on the right foot and then spread to multiple sites. They were itchy, some were painful, and they never went into involution or decreased in size. According to the patient and her mother, there was no previous history of any form of trauma. The patient’s father, brother, and daughter, who was four years old, all had similar skin lesions. Both the patient and her brother were born at term as the result of normal spontaneous vaginal deliveries after uncomplicated pregnancies. At 10 years of age, she had low endogenous growth hormone (GH) secretion and started GH therapy. Her height was 121 cm (−3 SDS) and her weight 22 kg (−2 SDS). She responded well, and the treatment was discontinued after two years. Her brother was also treated with GH for 10 years but did not respond as well. She has no history of keloid formation at the site of injection of the GH.

The patient was diagnosed with spontaneous keloids at the age of four, her brother at the age of six. Past medical history showed numerous heterogeneous treatments for various keloids in multiple loci; she previously received surgical extirpation and steroid injections. Despite these interventions, her keloids either recurred or persisted. Her brother and her father were never treated for keloids. On examination, she was short in stature, 145 cm (-2,5 SDS) and her weight was 43 kg. Her brother and her father were had a short stature as well. Her IQ was normal. She was also diagnosed with epilepsy and underwent long-term treatment for depression. Her brother had suicidal thoughts and was on antidepressants. On her face, she had orbital hypertelorism, bilateral ptosis, down-slanting palpebral fissures, asymmetric face, a normally shaped head, and a short webbed neck. Orally, she had a high-arched palate. She had pectus carinatum and scoliosis (Figure 1). Both her father and her brother had similar dysmorphic features. 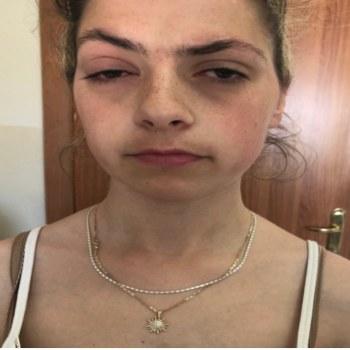 Figure 3: Brother of the proband. Irregularly shaped hyperpigmented, erythematous plaques with a shiny, smooth surface over the chest (A), right thigh (B), and back (C).

A skin examination revealed firm, irregularly shaped, hyperpigmented, and slightly erythematous plaques with a shiny, smooth surface over the right and left arms, both legs, glutealis bilateralis, and her trunk (Figure 2). Her brother had the same plaques; most were located on the trunk and legs and were red in color and very painful (Figure 3). Laboratory values showed anemia and dyslipidemia. An echocardiogram showed dilated cardiomyopathy.
The patient, her brother, and her father were diagnosed with Noonan syndrome associated with spontaneous keloids according to the diagnostic criteria for the syndrome proposed by Van der Burght in 1994.3 This patient has four major features – typical facial dysmorphology, cardiac manifestations, first degree relative with definitive diagnosis, and pectus carinatum – which are all definitive of Noonan syndrome according to the scoring system. An additional feature of Noonan syndrome is short stature. The height of the proband was below the 10th percentile. Her brother has the same features.
The patient underwent surgical excision of one of the keloids on her left arm, followed by radiotherapy within 24 hours, with one superficial single dose of 10 Gy. The target volume was the lesion plus 1 cm margin because the keloid was very thick and shiny. This keloid appeared spontaneously and was not previously treated. At four months post-therapy, the lesion had not recurred (Figure 4), and the patient reported no difficulty attributable to the lesion. Since the time frame is relatively short, keloid reoccurrence after a prolonged period of time cannot be ruled out. Her brother and her father refused any kind of treatment for their keloids. 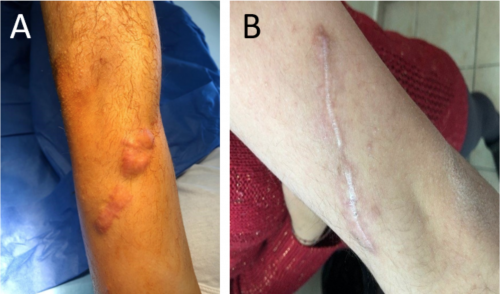 Figure 4: Keloid on the left arm (A) before the operation and (B) the scar four months after surgery and radiotherapy. 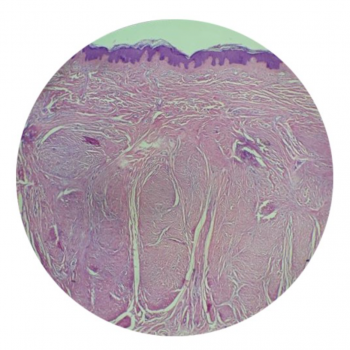 Figure 5: Histopathology of the keloid removed from the left arm.

The biopsy of the surgically removed keloid showed typical keloid features with nodular, thick, and hyalinized collagen fibers in the dermis (Figure 5).

Keloids are benign fibroproliferative tumors that extend beyond the original wound. Spontaneous keloids result absent a significant history of trauma and they are diagnosed mainly from history taking. It is generally believed that keloids are triggered by microtrauma in genetically susceptible patients. Spontaneous keloids have been reported mainly in association with certain syndromes such as Rubinstein-Taybi syndrome, Dubowitz syndrome, Noonan syndrome, Goeminne syndrome, Bethlem myopathy, X-linked recessive polyfibromatosis.1 Familial keloids are most likely passed on in a dominant additive or complex trait.4 Keloids can impair physical and psychological quality of life.5

Noonan syndrome is a congenital, autosomal dominant disorder with a wide spectrum of phenotypic expression.2 Affected persons have a normal karyotype, and the syndrome occurs with equal frequency in both genders.6 The characteristic clinical features of Noonan syndrome are ocular hypertelorism, downward slanting palpebral fissures, ptosis, high arched palate, dental malocclusion, low set ears, webbed neck, low posterior hair line, wool like hair, shield chest, wide-spaced nipples, sternal deformity, congenital heart disease (most commonly pulmonic stenosis), renal anomalies, delayed menarche, cryptorchidism, cubitus valgus, short stature, and impaired intellect.7 Noonan syndrome is diagnosed on clinical grounds by observation of key features. Affected individuals have normal chromosome studies. Molecular genetic testing identifies a pathogenic variant in PTPN11 in 50% of affected individuals, SOS1 in approximately 13%, RAF1 and RIT1 each in 5%, and KRAS in fewer than 5%. Other genes in which pathogenic variants have been reported to cause Noonan syndrome in less than 1% of cases include NRAS, BRAF, and MAP2K1.8 Treatment focuses on the problems that occur and is usually multidisciplinary. The expected outcome depends on the extent and severity of symptoms that are present.9

In this case, the patient was previously treated by surgical excision of the keloids several times, and at other times with intralesional corticosteroid injections, with no results. The keloid on her left arm was treated for the first time with surgery excision, and radiation therapy within 24 hours of surgery, with good results. Keloids are often resistant to treatment, recurring frequently.9 In keloid lesions, the therapy chosen is predicated upon several factors, including size of lesion, location, depth of lesion, age of patient, and past response to treatment. Surgical excision, radiation, pressure therapy, cryotherapy, intralesional injections of corticosteroids, interferon and fluorouracil, topical silicone and other dressings, and pulse-dye laser treatment have all been found to induce some degree of regression. Despite the broad range of treatment modalities, there is no universally accepted treatment protocol. In most instances, these therapies are used as an adjuvant to surgical excision.

This is the second case of spontaneous familial keloids associated with familial Noonan syndrome and the first case diagnosed in Albania. While no optimum treatment modality has been demonstrated for spontaneous and recurrent keloids in adults, surgical resection and adjuvant radiation therapy may provide an effective option for patients with large symptomatic keloids, with notable clinical success rates.

Written consent was obtained from the patients for publication of this case.

Thank you for your download, we hope you are satisfied with our software.